Kangaroos who hop majestically into the sunset; Kookaburras who fly laughing out loud from one tree to the next while you happily turn around again in the bed of your post-office-yellow van; dolphins and whales who play backfin clapping the wide ocean and koalas who slowly waddle to their next favourite eucalyptus tree. Surfing (or practicing to do something that somehow looks like surfing..) the whole day, meeting inspiring people, laughing, exploring, living. For all of this and more you’ll find time when travelling with time. And this is how we travelled along the East Coast of Australia for a few months, El Latinito and I. We worked on our 35year old Mazda “Sunny” over the course of many weekends and converted her from a vehicle to our home and so far she’s driven us driven us around without any problems! Travelling with time is a given in the old van, more than a cruising speed of 100km/h wouldn’t do her any good. 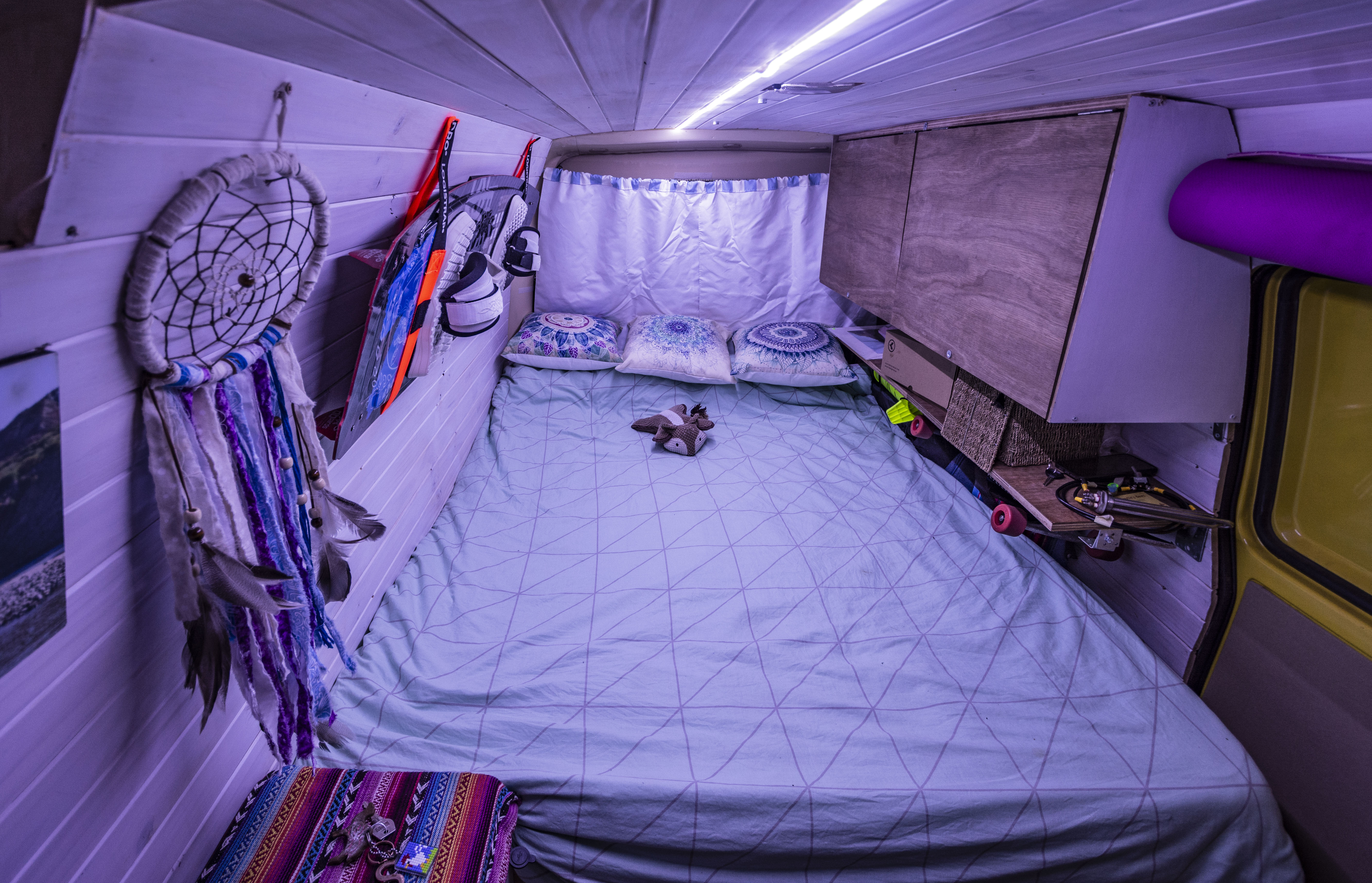 We drove in about eight weeks from Sydney up to Noosa, a route that most backpackers rush through with a two-week itinerary. Travelling with time, exactly the way I like it. Time for a morning coffee on the beach, slowly waking up while the sun rises above the ocean. I am so very spoilt and I know it. I couldn’t imagine anymore working in a way that most people do and having to juggle three weeks of yearly vacation. I got so very used to this life, we work hard and we work a lot and we share a house with ten other people in order to save money. And then we get to go and travel and live until it’s time to stop and find a job again. Nomad life. On little money, because it’s so easy to find very cheap  and even free campgrounds dotted all along the Coast (and we may have even stopped overnight on a few public parking spots on the beaches. This is nothing I’m recommending and I’m not taking any responsibility if a council man knocks on your window at the crack of dawn with a hefty fine in it’s hand. But we’ve experienced that in Australian winter, when most small coastal towns are in hibernation, it was no problem at all to have an overnighter on the beach parking lots. We usually asked locals who guided us to the best spots and were respectful- just one night, quiet, not leaving any trash behind), we usually cooked our own dinners and lived on picnic lunches and enjoy activities that are free anyways- long beach strolls, surfing and wildlife spotting.

On the very first day we didn’t even get any further than 100km out of Sydney, parked Sunny on a parking lot by Avoca Beach and were woken bright and early the next morning by laughing Kookaburras and locals who were already up and running, swimming and chatting over coffees. So we joined in, hands clutched around giant tea cups we sat on the rocky coast, watching patient fishermen and a bright orange rising sun. We explored the hills above Copacabana Beach, because I had read that whales love hanging out in that area between June and August. And really!! We hadn’t been there long at all when three of those majestic sea giants made an appearance, waving their fins in the waters below us. My heart made a little happy jump- what a beautiful moment to watch those gorgeous animals in the wild. They dived down under water and came back up a few meters away,  blowing out water, swam back and forth a few times and finally said Goodbye with their tails crashing on the water.

We had time to explore things and places in Australia that we didn’t even know existed! For example that time when I made El Latinito go around the small town of “The Entrance” (that is actually the name of the town because it’s the entrance to the Central Coast) to find a convenient parking spot to hop into a bakery and buy profiteroles after my coworker in Sydney had told me about it. The Profiteroles were delicious (even El Latinito admitted that after he was complaining for having to stop for a bakery) and while we were strolling through the town center we found a sign stating this place as the “Capital of Pelicans”- who knew?? Hundreds of pelicans live on the small islands close to the town and come in once a day for a mean feed of fish, which happened just as we were there. And without having planned it at all I had my very first close encounter with those funny birds 😀
We had time for long (beach) walks (and collecting ALL the beautiful sea shells! Well, that was me, mostly 😀 ) And we had time for walks in Port Stephens over to Shark Island and up the Tomaree Mountain and induldged in the best Fish’n’Chips down by the harbour afterwards (they said they’d have the best Fish’n’Chips and we agree so it must be true).
And we had time for some little jungle hikes, because nature in Australia is so incredibly versatile, everyone will find their favourite spot! 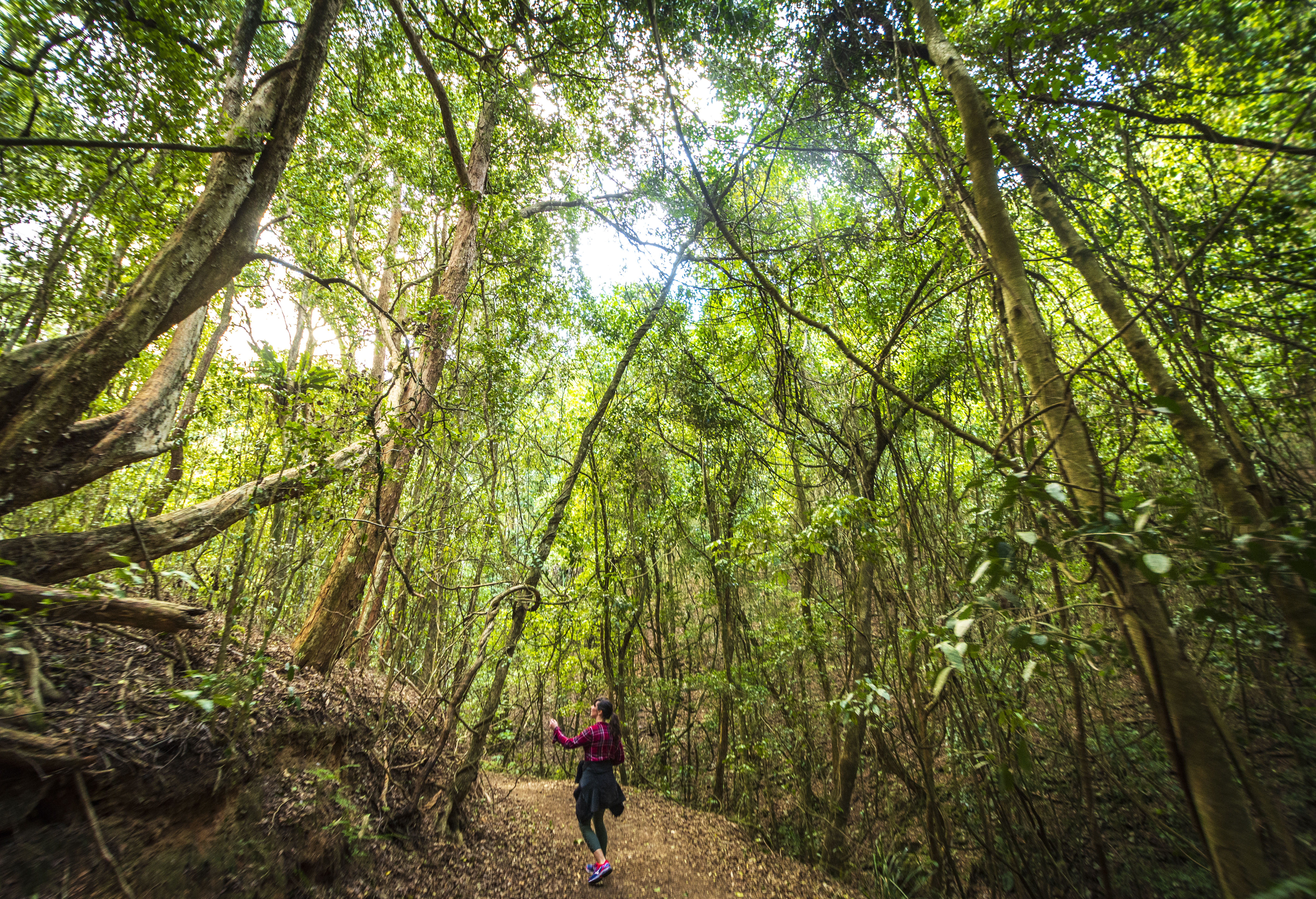 We had time to visit the cute little fluffy Koalas in the Koala hospital in Port Macquarie where injured and sick koalas are being cared for and either released back into nature later or find forever home there. We had time to ask many questions, watch those little sleepy heads and learn a lot (like the fact that they sleep between 18-20 hours every day and still somehow find the time to poop up to 200 times a day!). And we had time to go looking for wild koalas, basically in the middle of Port Macquarie! After a hot tip we were strolling through the “Kooloonbung Reserve”, along a quiet lake over a wooden path, our heads constantly tilted towards the sky, trying to spot koalas. Which we couldn’t find, only hundreds of flying foxes who watched us curiously with their big round eyes. Until the very end, almost! My head still up in the treetops I heard a hustle and bustle in the fallen leaves on the ground and there he was sitting, Mr. Koala, he looked at me for a little while and then wandered over to his next favourite tree. And my heart made another little happy jump- a real koala in the wild, almost close enough to be touched! How very lucky we are 😊

We had time to change our already almost non-existent plans, stay longer at places we liked and spontaneously do wonderful things. That’s how we met Alyke, born in Germany she now lives in Australia since several decades, and her two sausage dogs who told us about the favourite kangaroo hangout spot in South West Rocks (selfie with a kangaroo?! Check!) and then invited us to stay at her house for a couple of days. People that know the way to a Nomad’s heart are priceless- a bed, a shower AND an opportunity to wash clothes?! We landed in paradise! We ended up spending a week with lovely Alyke and her puppers Misty and Bella- wonderful time to talk, explore, laugh and learn. She took us to the stunning waterfalls in Dorrigo Nationalpark, to the cute little Hippietown where we had the most delicious lunch at The Old Butterfactory, to the Banana hills over Coff’s Harbour, to a little hidden gem in the back country where we tried buffalo ice cream and to Scott’s Head to watch the sun set over the ocean.

That being said- Scott’s Head might be my favourite little spot along the Coast so far- relaxed and small and perfect to practice surfing for a bloody beginner like me with a calm lagoon and super nice locals that very much don’t mind sharing the ocean (and believe me, we’ve met some real C-words in the water) and their surfspots and even encourage and give tips! Perfect spot for kitesurfing as well! That was something El Latinito wanted to get into and just like that we met Shorty one windy afternoon in Scott’s Head, who absolutely loves kitesurfing and who happily spent a couple of afternoons with my handsome Argetinean, teaching him the Do’s and Dont’s of the sport. Not long after we sat on the back yard of his house, sipping beers and telling stories. Australians?! Are the very best 😊 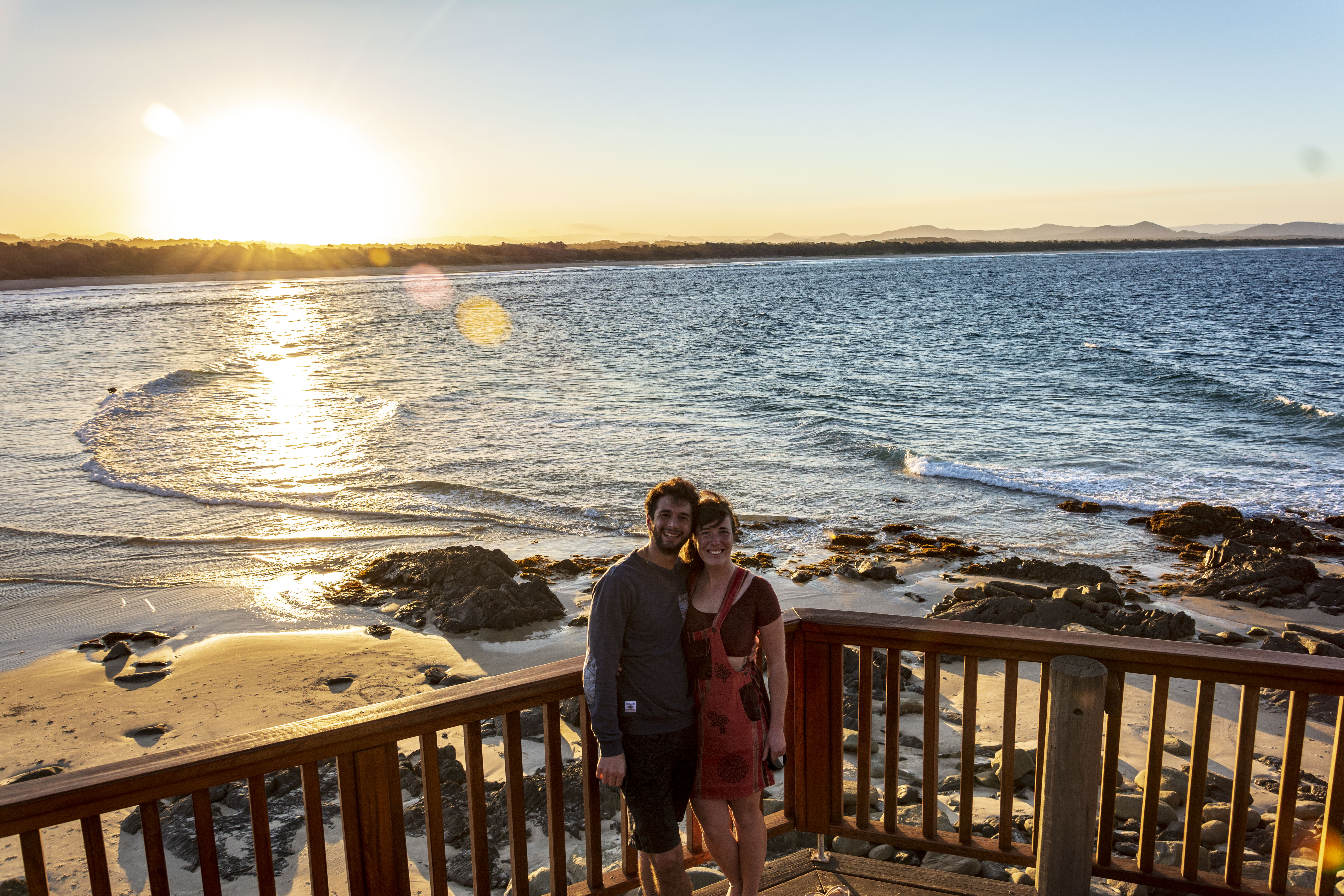 We had time to go surfing at Evan’s Head, calm waves, perfect me. We stayed in the water until the setting sun already coloured the water red and while I was sitting on my surfboard, patiently waiting for the next wave, a pod of dolphins swam happily laughing past, just a couple of meters away from me. Sounds too cheesy to be true?! But it happened, exactly like that, and was such a beautiful moment 😊
We had time to spontaneously say “We’ll see you tomorrow morning at eight then, mate!” when we had been talking to a local beekeeper at the pub in Grafton  who invited us to come with him to check his bees the next day (after El Latinito had exclaimed excitedly a couple of times how very interested he is in the art of beekeeping). And so we climbed into David’s Ute (that’s how Aussies call their Pick up trucks) the next morning and drove with him to the back country, visiting three of his bee populations, learned a lot (for example that the Queen isn’t really the one that gets to boss everyone around but in fact is more treated like a big important slave. And therefore sometimes tries to hide in her Queen nest, very much fed up with that whole business) and got to try the sweetest honey straight from the honey comb.

.
We had time to leave the coastal route and go inland for a little bit, we drove many kilometers over bumpy dirt roads to visit some gorgeous waterfalls and explored little towns where we were the only travelers mingling with the locals. Traveling the way I love it, leaving the well-trotted tourist paths behind. We quickly left Byron Bay for example, very much every backpacker’s favourite spot, after we had spent there less than a day. Too many people, too commercial, not enough space; just not our idea of a good time really.
We had time to travel with El Latinito’s Papa and his partner in crime for a couple of weeks, visited the sunrise watching kangaroos at Cape Hillsborough and sailed the Whitsundays for three days. The Whitsundays, my friends, was an absolute dream. We got to swim with sea turtles, found Nemo and saw a giant beautifully colourful clam! Inbetween snorkel adventures we warmed up under the hot australian sun on deck and saw a gorgeous sunrise from a slowly rocking boat. The Whitsunday’s really are worth a visit- pristine turquoise water, finest sand beaches, stingrays and enough time to explore the incredible world under water. To me there’s nothing quite as spectacular as snorkeling- it’s like a whole new world where you can’t hear anything except your own breath and everything looks so very different from the world above the water. So beautiful. 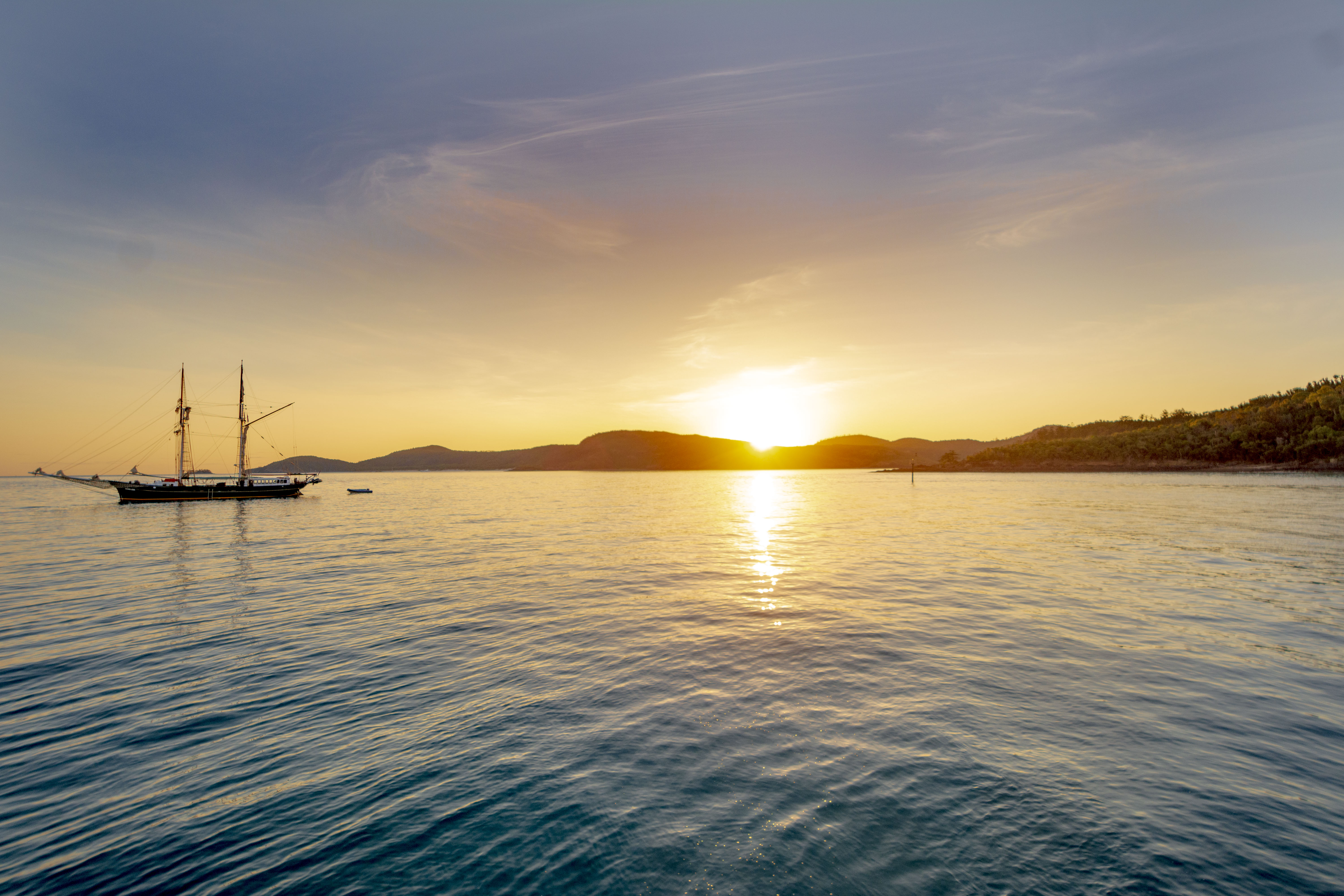 We had time for us and Australia and I’m already looking forward to explore more of this stunning country! For now we swapped Sunny for a cute cottage and the coastal areas for dry lands in almost the middle of nowhere by the border of NSW and Queensland- we’re doing farmwork so we will be able to keep exploring! But that’s a story for next time 😊
Until then- take time to be happy! 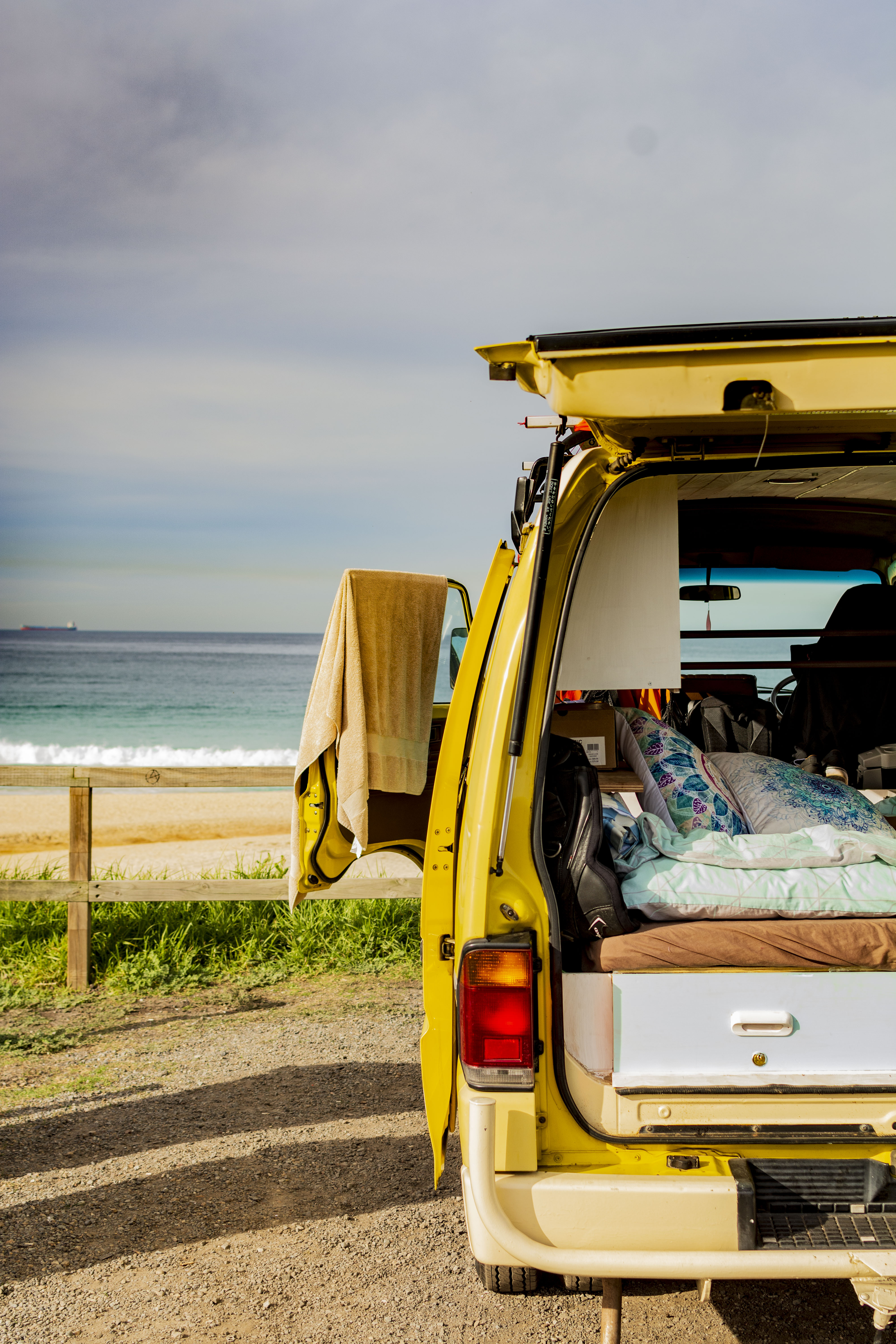 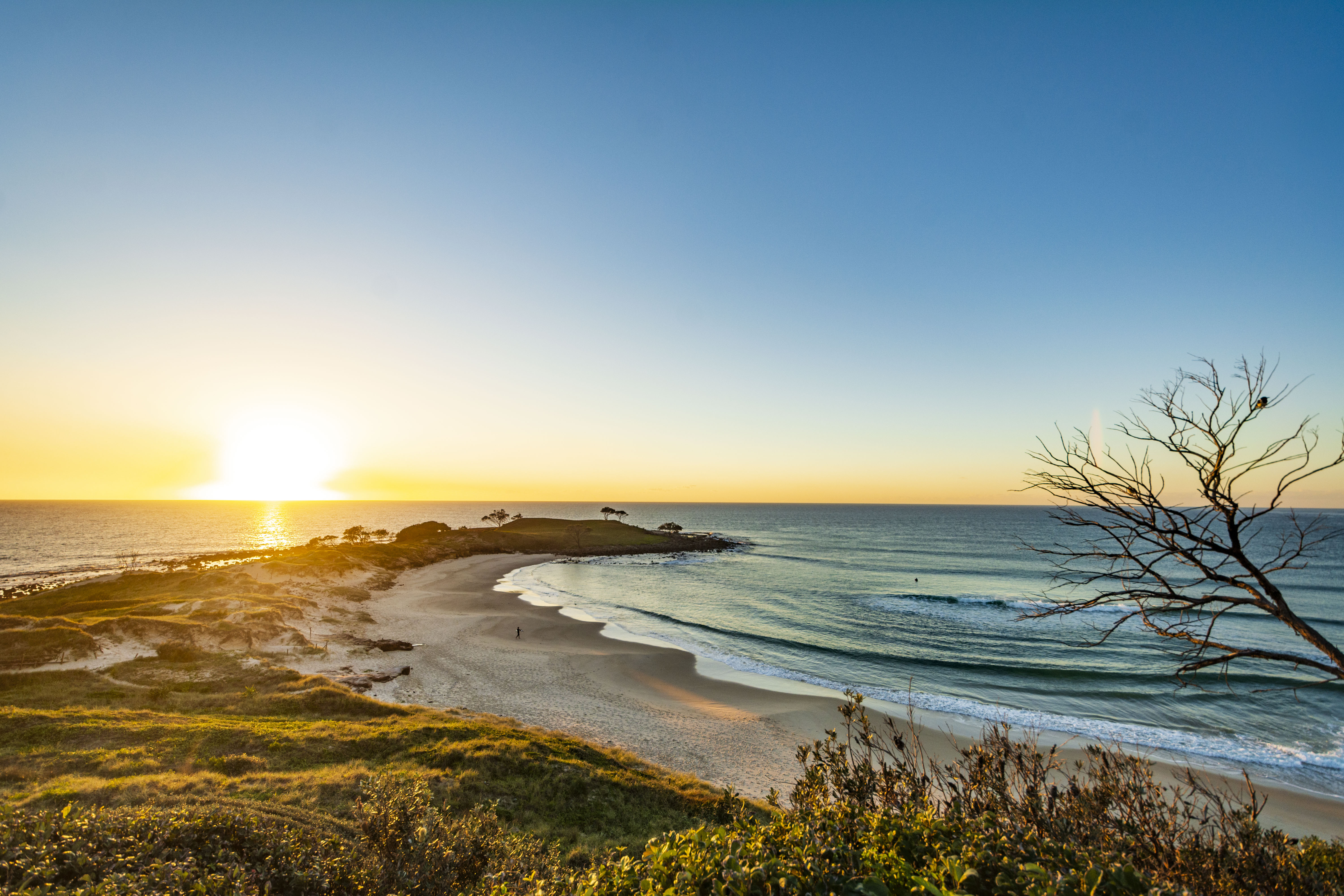 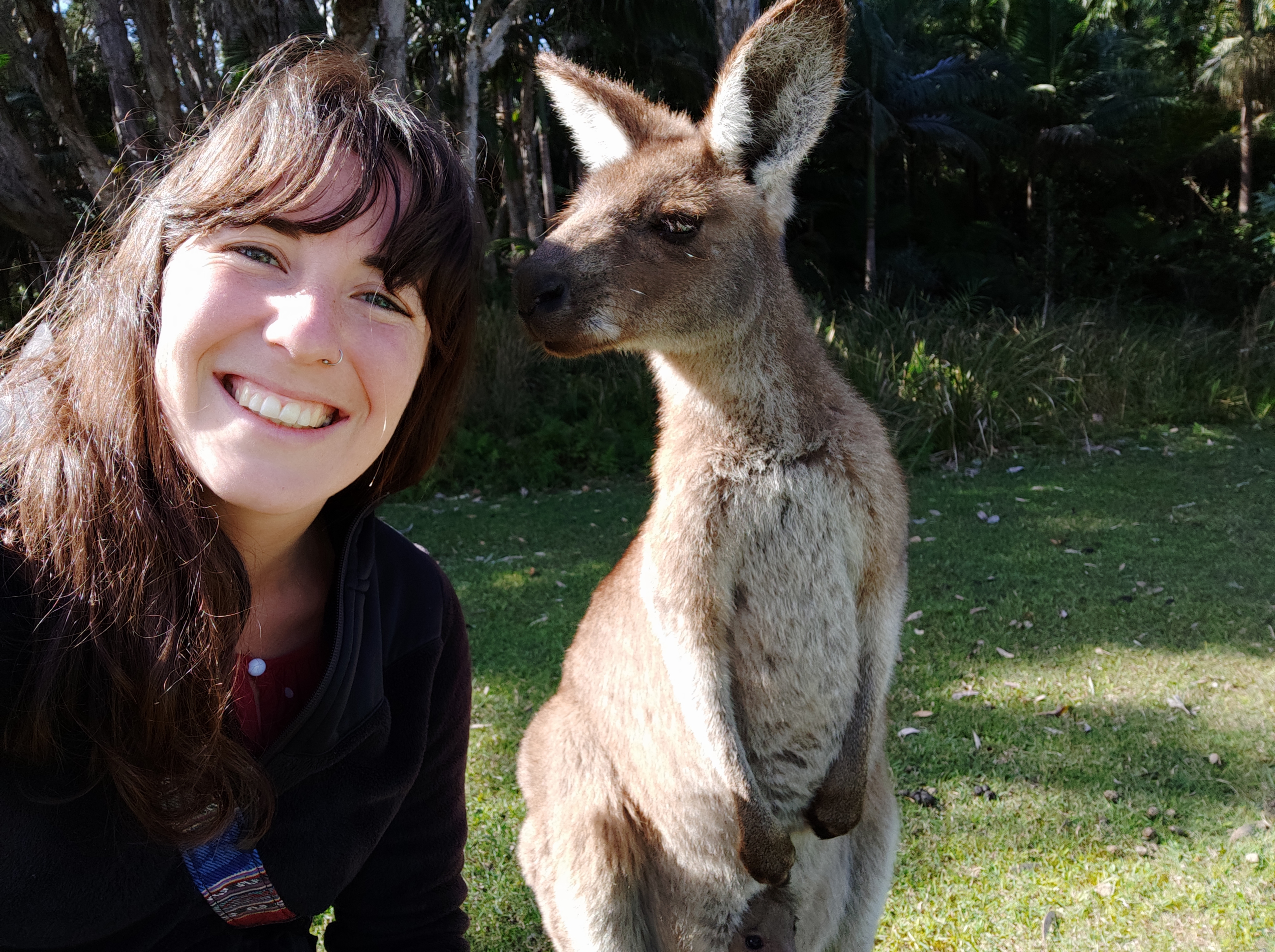 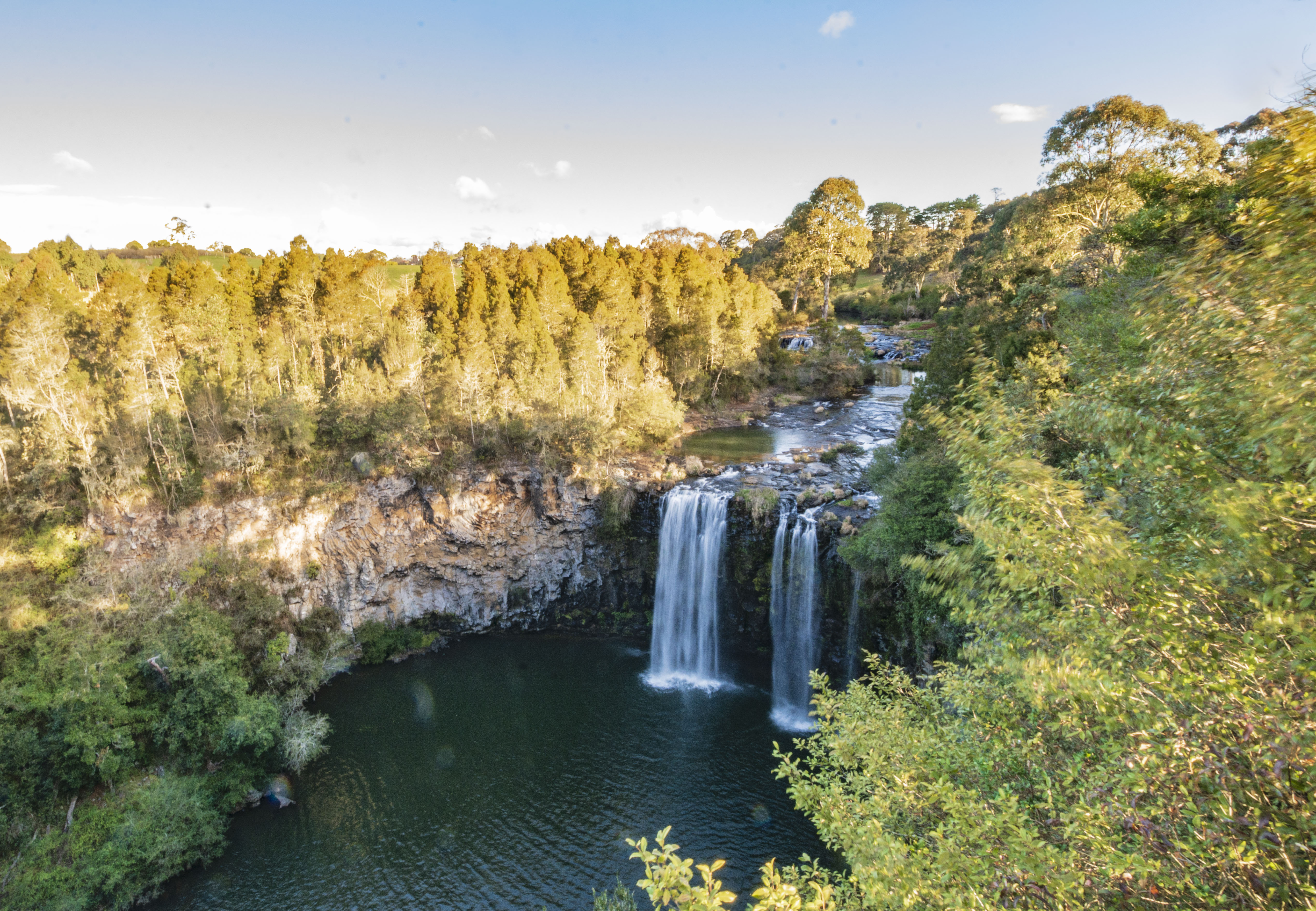 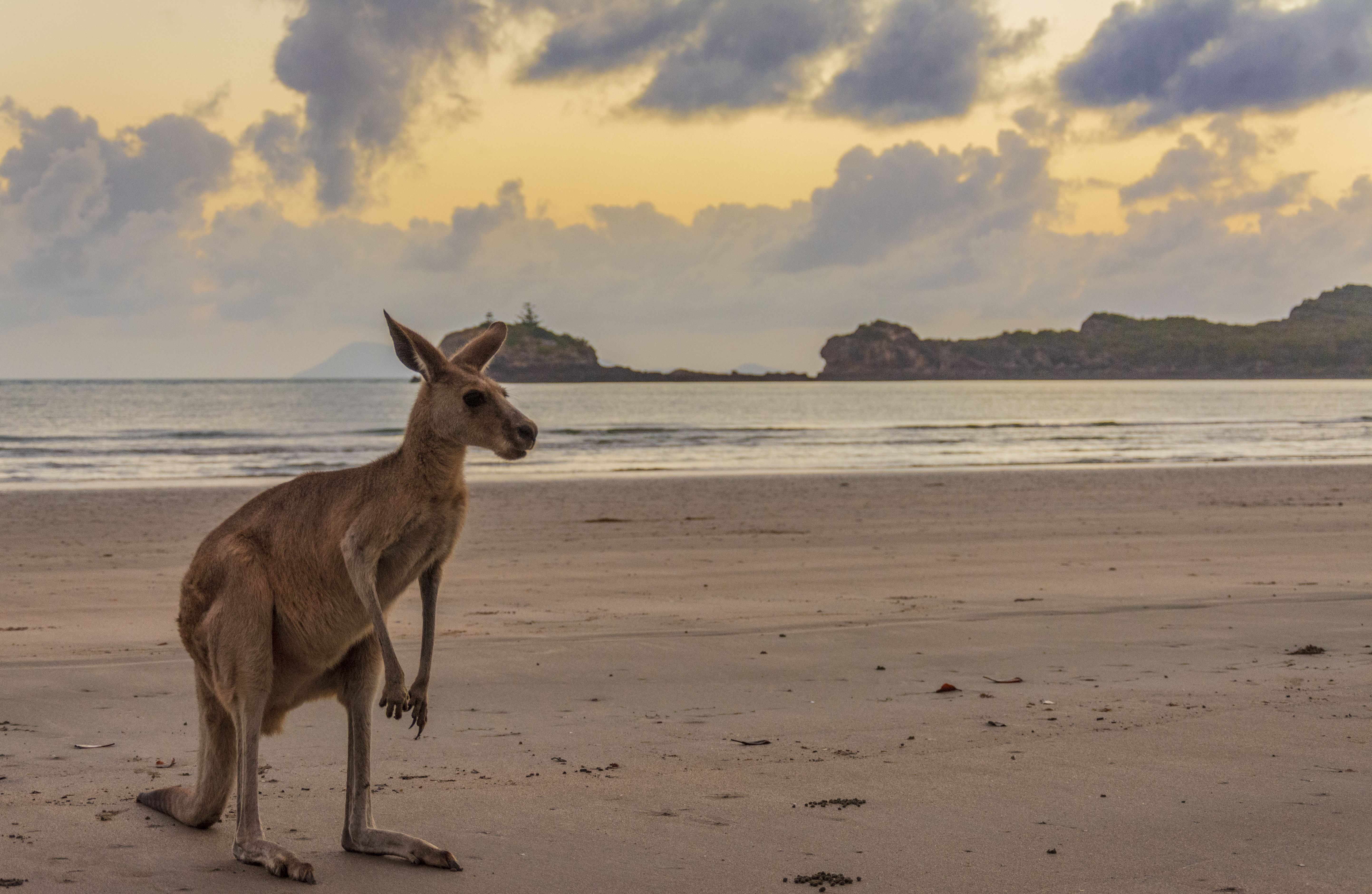 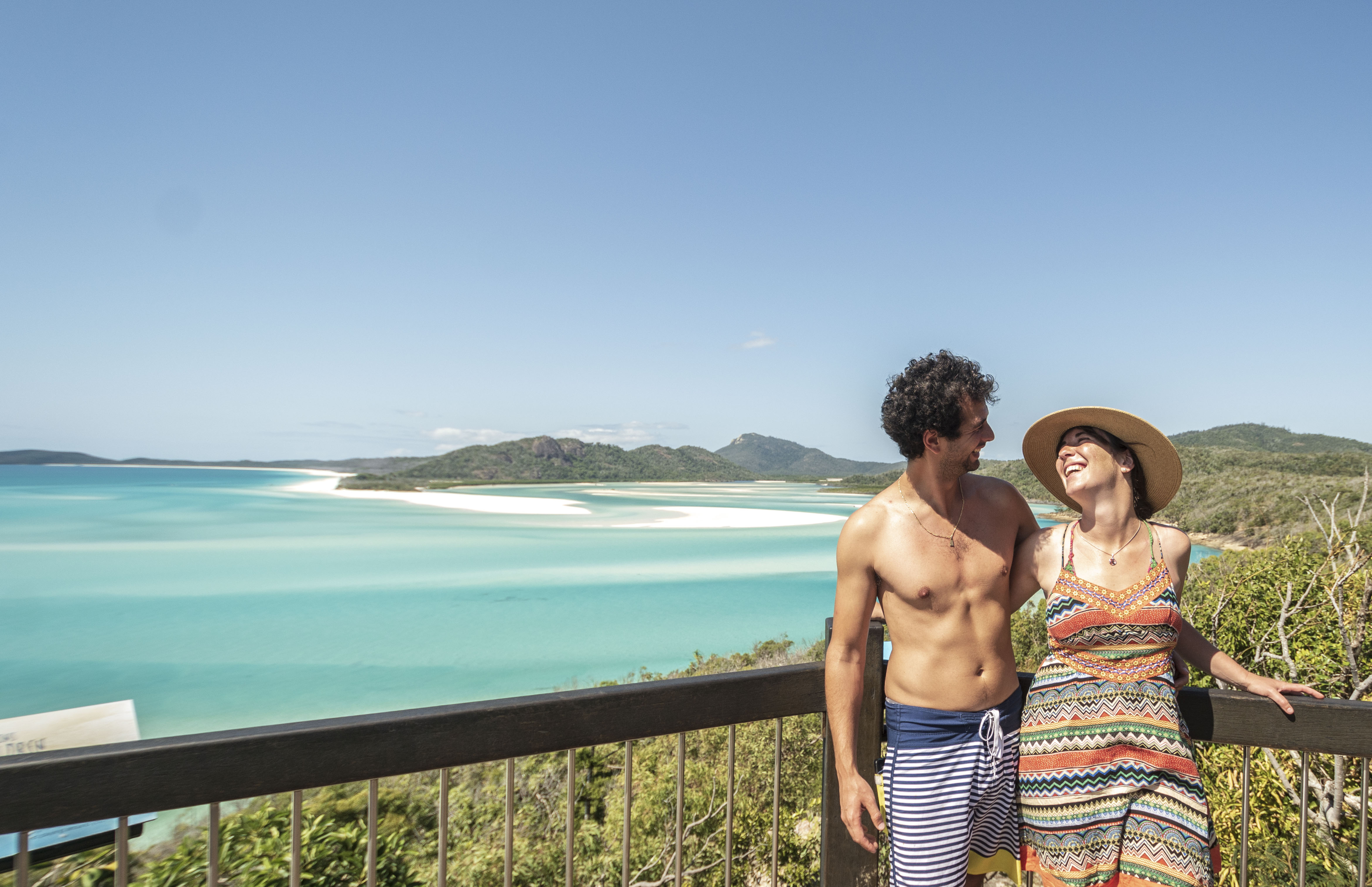