Never have I ever… hitchhiked before! I´m best being strong and independent and having to wait for someone willing to give me a lift and asking them for help would make me so dependent and obviously weak, I hated the idea! Also when you grow up your parents and teachers and everyone tells you plenty of times that you don´t take candy from people you don´t know and you DEFINITELY don´t get even near their car. So even after I took a couple of hitchhikers myself in New Zealand going “al dedo” (which in spanish means both fingers and toes, the idea of holding my naked toe out to stop a car always had me cracking up) was just not happening for me. Until I decided to solo-travel the South of Argentina, wanting to add a little extra “step out of your comfort zone” mission (because just throwing yourself out there alone isn´t enough, is it?!). I had been warned over and over and over again by several Argentinean friends in New Zealand that living in Argentina would be dangerous. Nothing to be compared to my safe and sound Queenstown bubble. Maria´s papa went into a tirade of how nobody (and especially not a woman!) should be travelling alone- and in his case I hadn´t even mentioned hitchhiking. But I´m stubborn. And I need my freedom. And in my few months in Argentina I had never even felt the slightest discomfort safety wise. And overall- Patagonia is so not comparable to Buenos Aires! So yes, I would be exploring it solo as well. And I was going to do it “al dedo” as much as possible, ditching public transport whenever I could, relying on strangers kindness for getting me from A to B while making awkward small talk in a language I barely even spoke.

I promise, Mom, I´ve done my research before!In Patagonia hitchhiking is a pretty common way of getting around and while I love adventures I´m still being cautious, my common sense will (hopefully) keep me from getting into dangerous situations- if I didn´t hear about all the very postive Patagonian hitchhiking stories, I wouldn´t have started it myself.
While I was planning my adventure I stumbled upon several blog posts about the Carretera Austral in the sparsely populated South of Chile- 1240km of gravel and asphalt connecting Puerto Montt in the northern parts and Villa O´Higgings in the far South since 1988 (the last 100km were finished only in 2000). By now it´s a famous destination for hitchhikers, bikers and motobikers, while of course being used by locals constantly to get from one spot to another. So I felt this was a great place to start, the worst that could happen would be having to wait several hours in line because there would be just too many of us, right?! I needed this trip to show myself that I could still do things I´d never done before, I knew that getting myself out of my comfort zone in a country where people constantly felt the need to tell me what I should or shouldn´t do would make me grow stronger and enjoy this adventure so much more. In a way, being dependent would make me so much more independent. 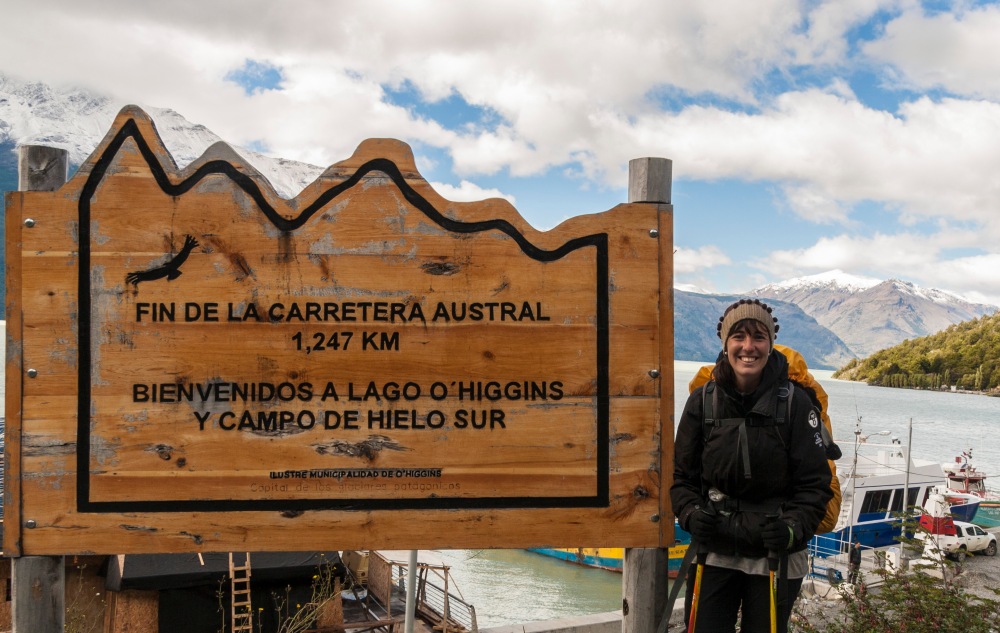 At first the idea was definitely to be saving money that way, but eventually it just turned into a challenge- I wanted to do the whole trip (Calafate to Bariloche) hitchhiking, no matter how cheap the local bus was. There absolutely were times when I hated me and my stupid ideas and stubbornness to complete a mission no matter what- on lonely days when nobody was passing for over an hour or times when the rain was pounding down. But I did it! I hitchhiked (and hiked, for that matter) …… km through the southern parts of Argentina and Chile in 25 different vehicles with uncountable different people, all the way from Villa O´Higgins to Futaleufu on the Carretera Austral and then some more in Argentina. I met wonderful people along the way, taking me just a few meters or hundreds of kilometers down the road.
There was my second hitchhike out of Calafate, where I got a ride before I was even able to put out my thumb as the lady in front of me at the local bakery saw me and thought “She sure looks like she´ll be hitchhiking.” and waited for me in her car just as I set out to walk the 3km out of town.
There was the time I hiked into Parque Patagonia in Chile, a good 12km to go to my free “campground”, angry black clouds collecting around me, me being sure I would be drenched to the bones within minutes. But then a bright yellow van neared and after a short hesitation decided to stop for me- a belgian couple on the way from Seattle to Ushuaia gave me a ride, conveniently going to spend the night at the same spot I had found on the incredibly helpful iOverlander app already. That evening we sat in camping chairs sipping beers and overlooking the dry grassy lands of the Parque Patagonia and later, when the cold crept in, cooking dinner together in their comfy van and sharing travel stories until the wee morning hours.

I have been so lucky though! I never waited longer than 75 minutes (as well due to the fact that March and April are slow touristy wise already) but heard of people spending eight hours and more on the side of the road. There was that rainy day when I was fourth in line, getting ready for a long wait and ten minutes later a petrol truck stopped and scooped all of us up. Or another day in the middle of nowhere in Chile, the next pueblo several kilometers away, a horrendous rainstorm whipping down. I quickly ran to the little bus shelter by the side of the road, just barely able to shield the angry storms, four people already cramped in there that had been waiting for hours. Two of them hopped onto the quickly arriving bus, not willing to wait any longer. Not even ten minutes after a Pick up Truck stopped, going to the exact little town I was going to- more than 300km to the North! And then the guy even spent his time finding a campground for me as the rain was still pounding down!

There was the time I was trying to get back into town after a hike, buckets of water falling from the sky, already being soaked to the bones, nobody taking that gravel road and a car just stopped to tell me that they were so very sorry, but they weren´t going into town 😀 The kindess of people down there is incredible! Shortly after an old couple with a very new pick up truck stopped, not worried at all about that dirty Hippie getting mud all over their cream leather seats, happily chittychatting along.
There was the time when I was sooo close to giving up on my hitchhiking mission- when the rain was splashing down yet again (I mean, yes, there was a lot of rain 😀 ) and I was trying to leave Esquel for Lago Puelo in the morning. The chances of getting a ride when you and your backpack are already soaking wet are pretty small. El Latinito was laughing on the phone about my stubbornness “Just get a freaking bus, why are you doing this to yourself?!” Because the mission!! I walked to the bus station, torn between bus comfort and mission completion, only to find out that I would have to wait for the next six hours- hell no, I might as well wait by the side of the road! And yet again- the rain eased to barely a drizzle, I stood there waiting for less than half an hour and the truck driver drove out of his way to drop me off exactly in Lago Puelo! 😀
There were really quiet times when my attempts of awkward smalltalk quickly ebbed away because the gauchos clearly weren´t interested in talking and there were times when we would talk for hours straight- about the differences between Argentina and Germany, where I had been and where I was going. There were times when I was sitting snuggly in the middle seat, Mate making the round and jokes being shared. There were times when I almost didn´t understand a word- old farmers talking with a heavy chilean accent that was so different to the spanish I had gotten used to- and would just chuckle and vaguely nod when being asked questions. It was mostly locals giving me rides (plus the belgian couple and a spanish one) and mostly men, they just seem to be on the road so much more. I never once felt unsafe or even uncomfortable, every single one of them has been respectful and kind and genuinely just wanting to help (shoutout to the one buying me chocolate (oops, accepting candy from a stranger whilst being in his car) and sharing his Tortas Fritas). It´s been a wonderful new way of travelling, getting to know the local culture and dig in deeper in a way I never knew before! Oh and the spanish that I learned, finally having to use it, no El Latinito around to help me out in english- the few times we were talking on the phone he honestly couldn´t believe how far I had gotten in such a short time 🙂
Jumping out of my comfort zone has been so rewarding yet again and getting around tramping has made the Patagonia experience even realer and truer. Stay safe out there, hitchhiking or not, and enjoy this beautiful adventure life 🙂