It’s not that difficult, really, once you’ve experienced the wonderful world of tea.  A world I will try to draw for you in words so you may understand what an incredibly beautiful world your cup of tea comes from. A world full of blue skies and tea plantations as far as the eye can see, a world that speaks to all of your senses, a world that excites you and calms you down all at the same time, a world that is dominated by kindly smiling wonderful people, a world as you’ve never seen it before. A world that Mister Fernando and Dilhan and so many other amazing people showed me. A world that reaches out to the poor and different abled in the community (but that particular world of the MJF Foundation has to wait until the next blog post, unfortunately). And if you’re a tea lover already then you’ll enjoy this little treat of tea stories. If you’re like I used to be and you only drink tea in the deepest of winter to warm your bones or when you have a cold going, come along anyways and you might just find your mind changed, like I did.  As I’m writing I have a cup of perfectly brewed Dilmah English Breakfast Tea by my side (just a tiny bit of tempered milk, thank you no sugar, we don’t want to take away from the natural tea flavour), a ‚Rose and French Vanilla‘ Tea infused Cupcake waiting to be devoured and the T-Radio station is quietly playing in the background (it’s an actual radio station by Dilmah to accomany your tea time, do check it out!). But come on, let’s go, tea world is waiting for us! 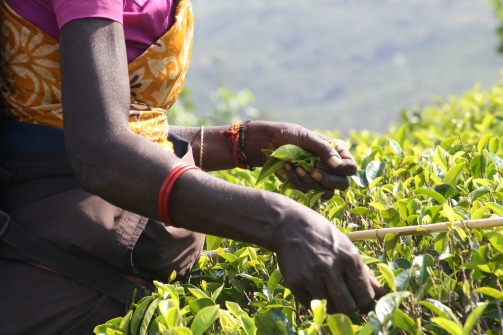 I have to admit I had no idea what to expect from Sri Lanka when we won that trip in July last year when partner in crime and boss Jaimie and I got gold at the ‚Dilmah Real High Tea Challenge‘ in Auckland, but I was incredibly eager to go and explore this country which sits right under India. Crazy excited and dressed in matching sun hats like proper weirdos and tourists we boarded a plane to Sri Lanka. Sri Lanka. Sri Lanka, you unbelievable beauty. We spent the first few days volunteering with the MJF Foundation, which has been the most unbelievably beautiful experience, but I will tell you about that in my next blog post. So let’s skip forward to the School of Tea!

We spent five days with 140 other hospo and foodie people from all over the world learning about tea, everything you can imagine there is to learn about tea and a bit more. We visited the Dilmah Factory in Colombo and saw first hand where and how all the teas are packaged using modern and ridiculously quick machines to ensure highest safety and hygiene standards. We learned about the differences between white, oolong, green and black tea; their health benefits (‚Thank you, Doctor.‘) and what each variety of tea can do to stimulate your mood. We learned how to brew (and taste) the perfect cups of green and black teas and had to proof our new knowledge in a brewing competition.

Nothing like a good old competition to get me interested in something, must be the german in me. I shamelessly admit that I used to leave my bag in the tea until I’d finished the cup- I know own three little hourglasses to be able to brew green/weak black/strong black tea perfect every time and even if you wake me up in the middle of the night I’ll be able to yell out the right water temperatures so you don’t burn your precious green tea.  We learned that Dilmah uses the orthodox way of manufacturing their teas and all steps are done traditionally  and that if you drink their teas, you can be sure that you’re only drinking tea manufactured in Sri Lanka on their plantations (single origin unblended pure ceylon tea). We learned that loose leaf tea and tea in bags have the exact same quality, it’s just a matter of leaf size and how strong of a cup of tea you want (smaller leaves/tea dust make a stronger tea). We learned how important wind, temperature, climate, rain, the ground the plant grows on and elevation is for the taste of tea. Did you know that tea grown in low elevations will have a completely different color compared to the ones grown in high elevations? Did you know as well that you should never ever call a your peppermint or chamomile brew a tea? Unless it actually has tea leaves in as well it’s a herbal infusion and the tea in your cupboard might get offended if you compare it to a herbal infusion.. Really, I don’t want to go too much into all that science behind tea. You can just flick me a message if you have any tea related questions as I’m basically a tea master now 😉

We took a train into the tea plantations and that was definitely one of the highlights! The Sri Lankan trainride has been voted one of the most scenic train rides in the world and I can whole leartedly agree. We took a five hour train ride from Colombo to Hatton two days later back again and I just spent every moment in that little area in between wagons where you could sit outside, feel the sun on your face and the wind in your hair and watch the world rush by (and by rush I mean that most parts of the way we were going slow enough that you could run next to the train :D). 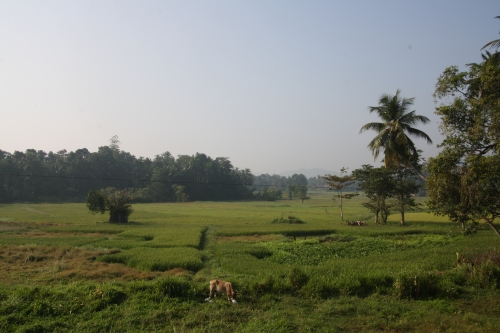 There were fields of rice and cows grassing in the morning light and lush  rainforests showcasing fifty shades of green and monkeys climbing in Jackfruit trees and colourful flowers lining busy train stations, there were straydogs napping, not being at all disturbed by the travelers rushing over them.

There were small settlements of makeshift houses and Sri Lankans taking baths in nearby streams with their colourful Sarees and dresses drying on roofs. There were kids and teens and even grown ups excitedly waving at us, smiling and laughing, whenever we passed them slow enough. Once we had traveled high enough we started seeing first tea transplantations. There was green from the tea plants and grey from the surrounding mountains and blue from the sky and it was wonderful. Taking the train in Sri Lanka is such a wonderful way to travel, slow enough for your soul to be able to keep up and a wonderful opportunity to catch up with your fellow travelers. From that polish executive chef who has the funniest stories to tell and knows your little german hometown all to well to that Food and Beverage Manager from Jordan who talks about his homecountry and makes you want to pack your bags and travel the world to the Chilean bartender and that beautiful quirky little Malaysian girl.

I had my cup of English Breakfast in the morning, watching the sun rise over the misty rice fields, the air still fresh and just being there, in that very moment, made me plain happy. The opportunities I have, the places I get to go, the people I get to meet, the friends I get to make, the moments I get to experience. And live. And feel 🙂

It was a little drive from the train station to the Dunkeld Estate by, one of Dilmah’s plantations and black tea factory. I did enjoy learning about everything tea, but I absolutely loved experiencing everything about tea! We got to go and wander into the tea bushes and see how the wonderful tea pickers did their work (‚TWO LEAVES AND A BUD, PEOPLE, TWO LEAVES AND A BUD!‘ our guy kept reminding us every second sentence and I promise, I will never ever forget about that again!), 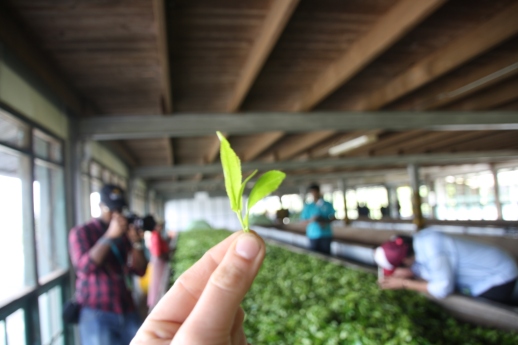 we got to into the factory and see and smell how the the was manufactured from withering over  rolling, breaking, fermenting to baking and sorting, which was incredibly interesting. Did you know as well that green and black tea are sourced from the same plant? It’s just a matter of not fermenting the green tea at all, which makes the difference. We did get to see a green tea factory at Park Estate the next day as well.

We learned about tea pairings and tea infusions in food as well as in cocktails, which was one of my favorite parts, not going to lie! You can always get me with food. And cheese especially! You will probably be as  surprised as I am to hear about Tea and Cheese pairings. Well, let me tell you, it’s a match made in heaven. I even enjoy it more than wines paired with cheese. That might have to do with the insanely good Pierre Robert dutch cheese lady Betty Koster had in her suitcase for us. That ridiculously creamy and rich french cow cheese paired with a green tea is all you’ll ever need in life. That and five other beautiful cheese and tea pairings. But mostly Pierre Robert. That’s Love.
Award winning mixilogyst Robert Schinkel introduced us to a) his dance moves, b) his knowledge about creating tea inspired cocktails and chais (black tea shaken with sweetened condensed milk and spices and then pulled to froth it up) and c) his pekoe- a tea liqueur that he created and which is just beautiful. The pekoe liqueur introduction did not happen until way later that night though and I only have distant memories of it.. 😀 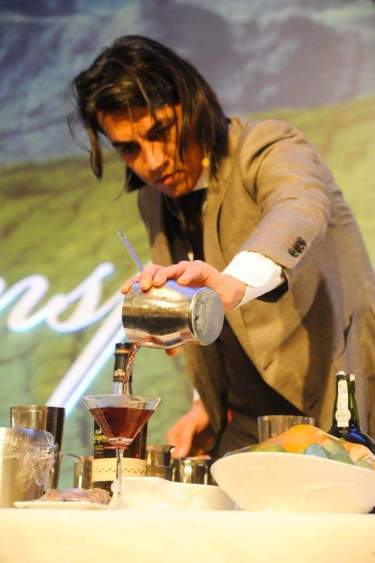 Jaimie and I rolled up our sleeves as well and put on our aprons, marching into Hilton’s pastry kitchen at 4.30 in the morning while the rest of our crew was still fast asleep. We set out to re-create one of our winning High Tea Challenge dishes, the Earl Grey Cupcake. Ever tried baking in a different kitchen, in a foreign country, with rather different ingredients?! Fun fun.. 😉 We did get our little beauty out of the ovens and onto the plates though where they were shining alongside a few other desserts created by fellow pastry chefs. And because we just can’t get enough we hosted a Valentine’s Day Event at the Dilmah T-Lounge in Colombo. A cozy and welcoming boutique little restaurant showcasing Dilmah teas, they even have one at Dubai airport now, do visit one on your next travels! We spent two days in the central kitchen with the most fun and welcoming chefs, who seemed to love hosting us, kept us well-fed and were incredibly helpful.

Working alongside them was easy as and made prepping for the ‚When Earl met Rose‘ so easy. So did the wonderful crowd that had gathered at the Lounge to spend their Valentine’s Day with us.

There was our by now famous Earl Grey Cupcake with Bergamot Buttercream and Earl Grey infused caramel and a Rose and French Vanilla infused Cakepop, dipped in white chocolate and coated in shortbread cookie crumb and raspberry powder. Paired with a black Galle District OP and a Natural Rosehip with Hibiscus Tea.

Wonderful people, a beautiful location, lovely conversations and some amazing food (if I may say so myself) 🙂

I do have to admit that I still enjoy my cup of coffee, but tea has taken such an important role in my daily life and now you’ll see me opting for my cup of tea way more often than a coffee and I have thousand ideas to infuse tea into cakes! I hope I was able to introduce you to the magical tea world just a little bit. Do try it yourself and do see for yourself, Sri Lanka is such a beautiful country to dive headfirst into.Until next time, my friends, for more Sri Lankan stories! 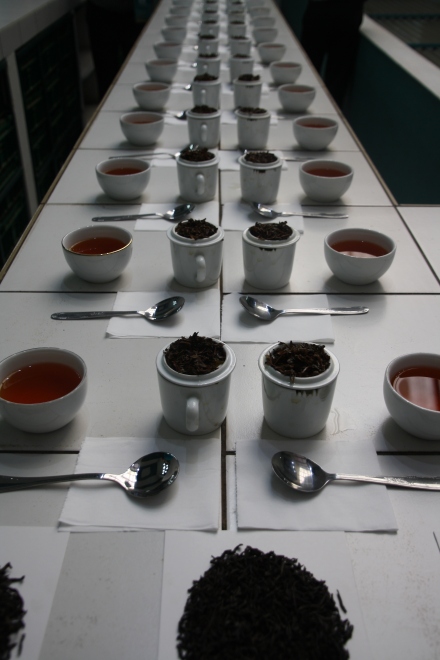 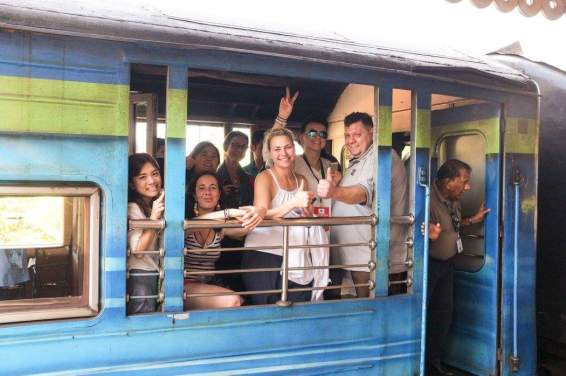 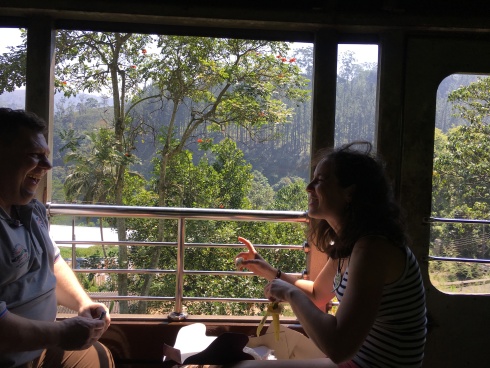 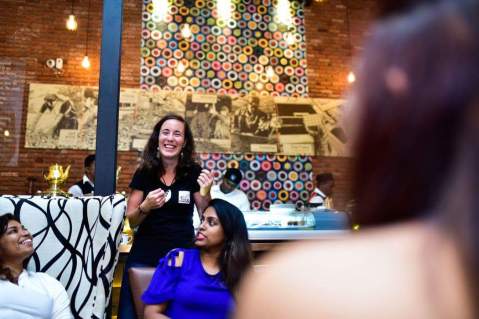 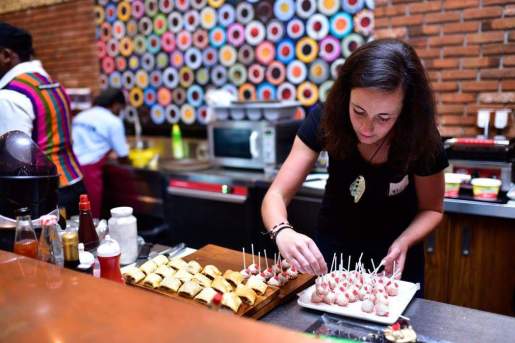