„It’s the help that we give, it’s the love that we live, it’s our pride in the friendships we form. It’s the courage we show facing things we don’t know, it’s the way that we weather the storm!“ A song originally composed by Benjamin Scheuer for his musical „The Lion“and stuck in my head since I’ve been listening to my crazy friend Jani singing it (several hours on repeat, to be fair! 😉 ) on a warm autumn day in Wanaka, forming a crowd of happily dancing strangers around his little piano. And I kept it close to my heart because it very much sums up my year spent in Queenstown. 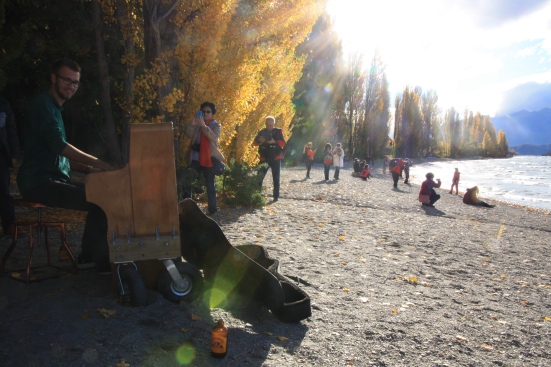 A year in Queenstown and what a year it’s been! I’ve been wanting to work on a „Look back on the last year“ blog, ready to publish once I hit my first anniversary. Which didn’t happen, obviously. Because I was busy living life and didn’t feel inspired enough to sit down and actually write. Until I got a message this morning from Yannick- a name that didn’t ring any bells at first and curiously I opened the message. It was from my hitchhiker  from Luxembourg I had picked up three months ago on my way back from a hike and over the two hour car ride we talked and talked and talked and hugged Good Bye without exchanging contact information or anything- but I  did give him one of my tiny travelbuddy rainbow unicorns (and I will come back to that). And I don’t know how but he managed to find me on Facebook to tell me about and show pictures of the adventures unicorn Alaska and he had been on and that left me in such a happy place, I don’t even have words for it.

It’s the amazing humans we meet that make life worth living and it doesn’t matter if it’s a two hour car ride or a day together at the Butterfli Lodge or three months at the Cupcake store.  Some people come into your life and make it a bit better, or a lot, mostly without even knowing it. So here’s my story about the people in my Queenstown life that make the place to the home it is.

Especially living at a hostel it’s only natural that you meet amazing people all the time. People you share your passions and ideas with, people you can talk to for hours and hours, people that inspire you to be a better person, people that are as crazy as you are,  lost kids from Neverland that share a part of your journey. And my time in Queenstown wouldn’t have been the same if it wouldn’t have been for the French and Argentineans, the Germans and Americans, the Italians and Australians, the people from all over the world that form my crazy family. So come on, let me introduce you to those beautiful human beings who I was lucky enough to cross paths with.

There’s Jan, who I’ve been telling you about already. Jani, the crazy German who is an amazing photographer and always always up for an adventure. He is full of crazy ideas and turns his ideas into actual reality- the most recent one being his piano, which he takes around New Zealand to play and take pictures. This is how we ended up by the lakefront in Wanaka- playing piano, singing „Weather the storm“ (which I was supposed to record- I’d rather not talk about my videographer skills..), sipping ginger beer and being perfectly happy with life. Jani will randomly show up at my door at eleven at night to drive out to watch the stars. He makes me do things I didn’t know I was capable of doing. Like turning blog posts into song lyrics. Jani is just so excited happy, it’s contagious. 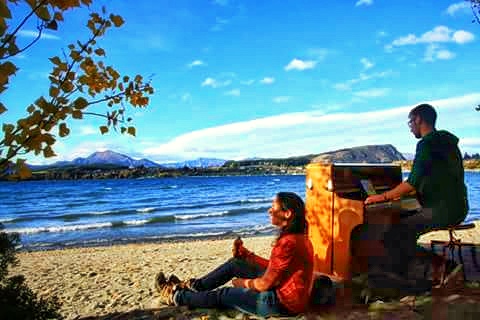 There’s Cassidy of course, who formed the adventure trio with Jan and me. Cassidy is from Utah, USA and currently trying to get onto a sail boat to set out to new adventures. Cassidy means cliff jumps in the summer, daily chores like grocery shopping turning into adventurous trips with his scooter Aurora and Boston Cream Donuts by Lake Wakatipu. Cassidy means waterfall adventures and banana pancakes and worry free  happy days and inspiration. Him and Jan could discuss and argue for hours without stopping and I very happily just liked listening to those two crazy minds. Cassidy is proof that you can achieve anything you set your mind to, no matter what society might try to limit you to. He is seriously amazing.

There’s my wonderful Dessert loving Texan friend Brittany! We’re twins basically. Or like a married couple at times. She danced Disney-Princess-like into the Cupcake store and my life in January this year and turned from being „just“ my co-worker (and roommate at the Cabbage Tree house because I promised breakfasts) into my best friend! She’s a happy and bubbly (besides randomly thrown tantrums) travel blogger, has amazing hair and is very possibly the nicest person you’ll ever meet. Brittany means Taylor Swift Sundays at the Cupcake store, chocolate and movies on cold winter nights, Latin Parties and Tequila, Devil Burger dates on Sundays, Snapchat stories when walking up Queenstown hill and laying in the freezing cold for hours because we just can’t leave the Enchanted Forest. Brittany means laughing until my tummy actually hurts when she comes into the store at ten in the morning with her latest stories. She’s one of those persons that comes into my life and I know she’ll hang out there for a very long while or keep coming back into it 🙂 Si te vas yo me voy contigo! 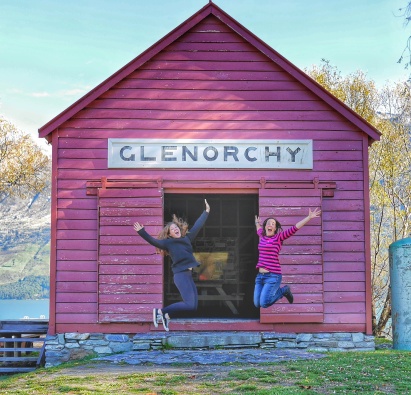 There’s my amaaaaazing french Julien Muki, that crazy peruvian demon, we discuss daily who is the crazier one and still haven’t made a decision yet on that. Muki is the friendliest and happiest guy you will ever come across (if he does get upset, there’s nothing a Ferrero Rocher Cupcake can’t fix!). Julien means dancing absolutely ridiculously through the Butterfli Lodge with everyone looking at us as if we were actually loosing our minds right there, but us not giving one single fuck, because.. well just because really. He means Lunchbreak Waterfall Adventures and the very best hugs and laughing until we basically can’t breathe anymore and unicorn slippers. He means dancing on Saturday nights and romarin and really, he made my time at the Butterfli Lodge a whole lot more amazing. 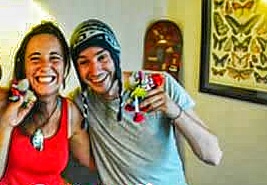 There’s all my other lovely french! Julien2, who wasn’t even going to stay in Queenstown and now has made the Lodge his permanent home as well

and the wonderful Nina and rainbow-pooping Antoine.  And there’s my hiking buddy Sylvain! I first met him at the local DoC-Office enquiring about a multi-day-hike and next thing I knew he was hanging out at the Butterfli Lodge because he’s been friends with Julien since High School. And it’s all history from there really 😉 Saturday-Tequilas and Sunday-Cupcake-Deliveries, Crepe-flipping-classes and Ben Lomond phone calls. And of course exploring this gorgeous country together! 🙂 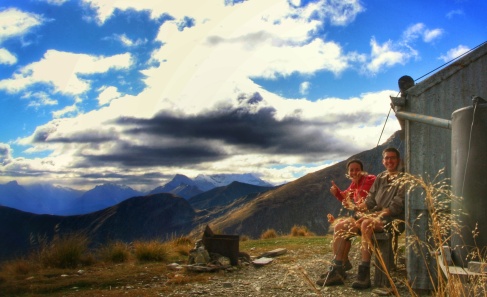 There’s my Argentinean chanchito Luciano who’s trying his best to teach me spanish so I can go and travel South America in his old blue VW Kombi painted with Hippie flowers and unicorns 😉 I can honestly say that I found my match in craziness right there. He’s after-work-adventures in the rivers of Arrowtown and in the first snow of the year up at Remarkables with a 4×4 and afternoons exploring Kingston and stars on cold nights and rebuilding my Hippie Van together 🙂 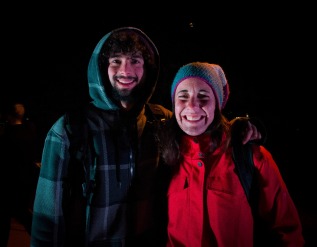 There’s Jaimie, of course! My boss and friend and New Zealand Mom all in once! We are just so clever that we are constantly nailing it at the Cupcake Store. Drip Cakes and Bergamont infused caramel and Dilmah High Tea Challenges in Cromwell and Christmas season just the two of us. There’s a constant laughing and singing and dancing while we’re working and I couldn’t ask for a better boss to work for and with. There’s so much I learn from her, business-and lifewise and I’m just so glad I ended up here at Cup and Cake 🙂

There’s fellow bad ass chick Emma who I went downhill mountain biking with for the very first time in my life, which had my adrenaline rushing and blood pumping. 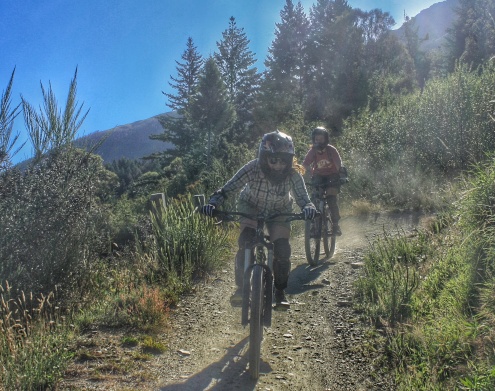 There’s Finnish snowboardchick Maiju and my german girl Frauke who would always have the most hilarious stories to tell when she came in to see me at the Cupcake store 😀 There’s spanish guitar songs playing Esteban and „Every little thing is gonna be alright“-Roadtrip-friend Nico and breadbaking buddy Tiago and sheep sitting Pilot Nick and Brazilian jungle boy Theus. 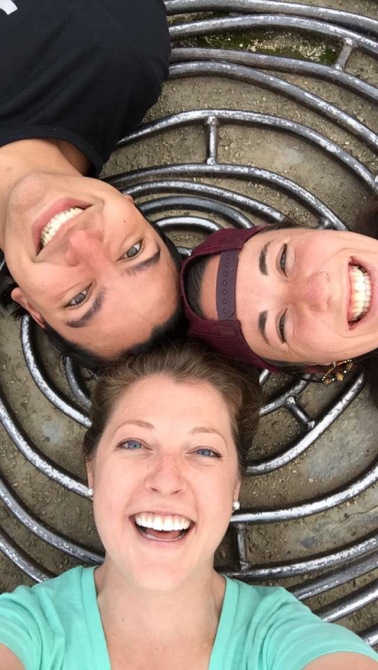 There’s my gorgeous Pasta Bolognese making Italian Chef JJ and Sunday-afternoon-walks-and-philosophing-about-life Angelica 🙂 There’s my german friend Felix who stayed at the Lodge for a couple of days and Felix means unicorns and laying under the starry night and talking about Cafes and long wooden tables, music and fairy lights and everything else that’s important in life.

There’s Uta, who I’ve been giving advice about her New Zealand trip months before she left Germany and who came by to visit me in her colourful Hippie pants and curly hair and it almost felt like having my Mom come and see me 🙂 There’s Bri, who worked with me at the Cupcake store for a while and we’ve had so many laughs and good talks over decorating sugar cookies at Christmas time! There’s so many other people and way too many to mention every single one right here..

365 days in Queenstown with gorgeous people wandering into my life! A year that made me stronger and braver and a better person. A year that taught me more than ever how to enjoy life, how to make the best of every situation, how to love and live and be. But let me introduce the Rainbow Unicorn Project! Unicorns, of course. Everybody knows me as the unicorn girl, I don’t know exactly how it happened but I guess it started when Robert and I became best friends and travel buddies back in Florida. I’ve been crocheting tiny rainbow unicorns, not exactly knowing why, but eventually I started just giving them away.

To beautiful human beings that had made an impression on me. People that had turned into friends; people that had changed my way in thinking, people that inspired me, people that touched my heart, people that I knew would stay in my mind because they were special. So by now there’s a growing tiny rainbow unicorn community out in the world and it makes me incredibly happy to give away unicorn travel buddies and see the smiles of my friends and later see unicorn pictures from everywhere. Because that way all you wonderful people stay with me and I stay with you. No matter the miles and months apart 🙂 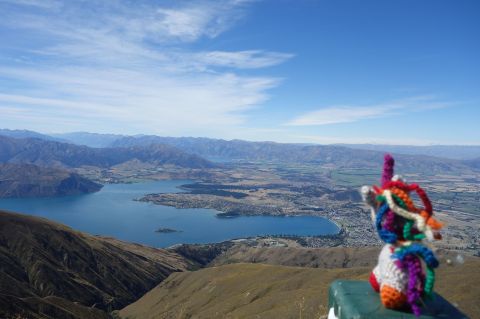 „It’s the help that we give, it’s the love that we live. It’s our pride in the friendships we form. It’s the courage we show facing things we don’t know. It’s the way that we weather the storm.“ And weathering the storms has never been more wonderful than it is now 🙂

Love, Peace and Rainbowunicorns and until next time 🙂 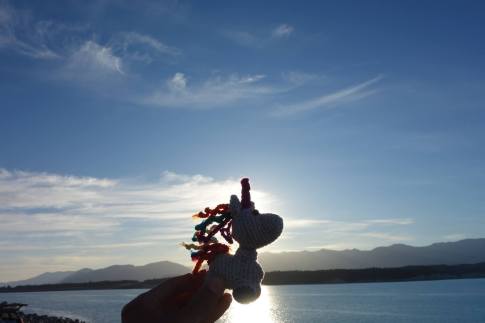 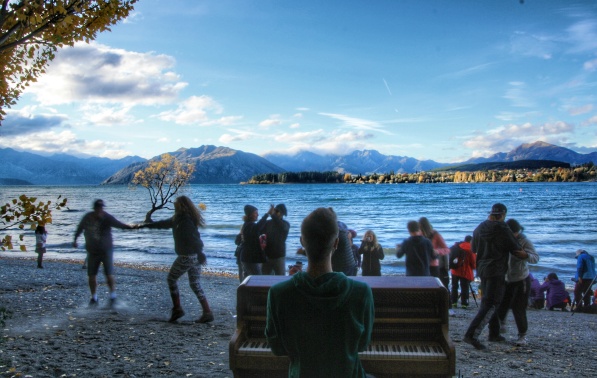 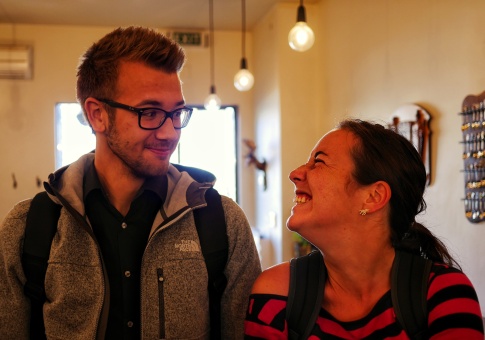 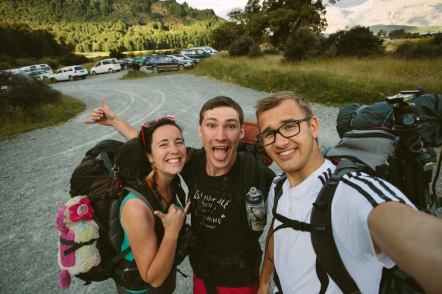 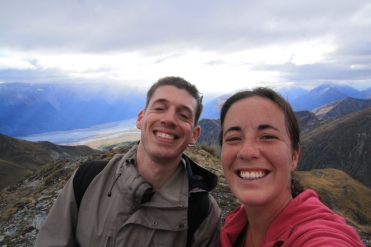 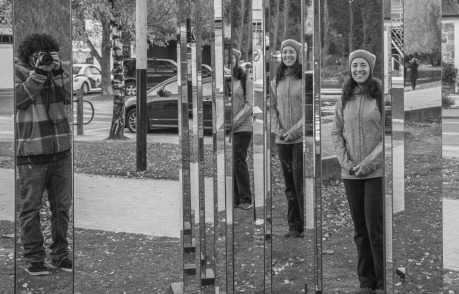 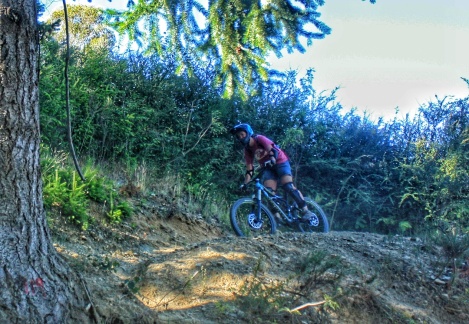 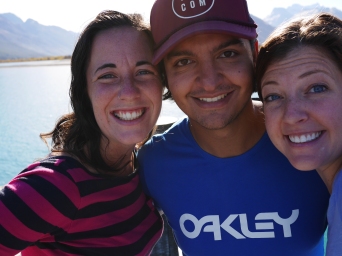 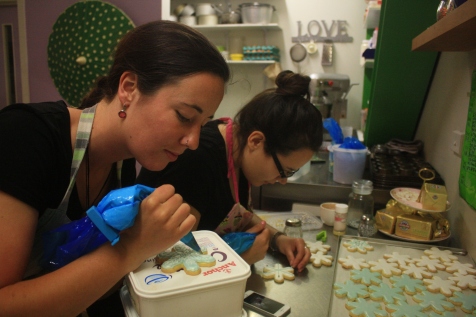 „It’s the help that we give, it’s the love that we live. It’s our pride in the friendships we form. It’s the courage we show facing things we don’t know, it’s the way that we weather the storm.“ Und durch den Sturm tanzen war nie so einfach und schön, wie es jetzt  ist 🙂 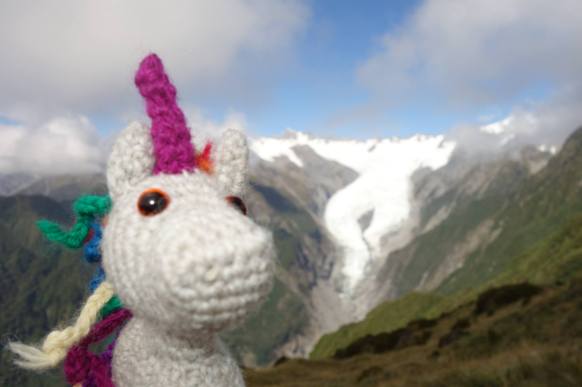